The Rescue of Streetcar 304: A Navy Pilot’s Forty Hours on the Run in Laos 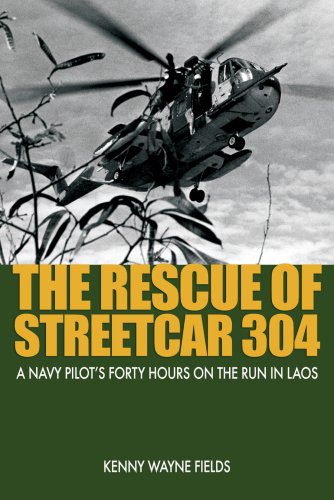 On 31 Might 1968, Lt. Kenny Fields catapulted off USS America in his A-7 for his first-ever fight mission. His goal was 2 hundred miles away in Laos. What the planners didn’t know was that Fields was en route to an enormous focus of AAA gun websites amidst a whole North Vietnamese division.

Fields, name signal Streetcar 304, was the primary to roll in, and he destroyed that focus on with a direct hit. Three AAA weapons started to fireplace, however, following his wingman’s run, he rolled in once more. This time many extra AAA weapons opened up and Fields was shot down. Quickly, a rescue pilot suffered the identical destiny.

The Rescue of Streetcar 304 is Fields’ exhilarating narrative of the forty hours that adopted and what turned out to be one of many largest and most spine-tingling air rescues of the Vietnam Struggle.

Fields mixes humor and drama as he recounts teeth-chattering shut encounters with Pathet Lao guerillas, and practically being killed repeatedly by pleasant bombs. He describes in riveting element the radio chatter between individuals, and the stress results of dealing with worry, sleep deprivation, wild animals, and relentless AAA. By the point it was over, the U.S. Air Pressure had flown 189 sorties to rescue Fields, and within the course of 4 pilots ejected, seven planes have been misplaced or closely broken, and one pilot turned a POW for 5 years.